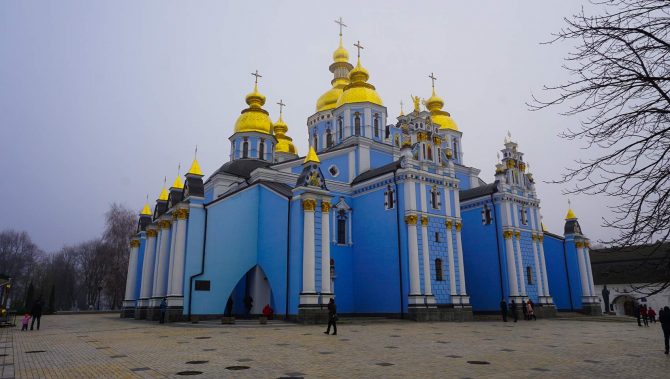 After our last year’s unlucky attempt to get to Ukraine by car through our eastern Slovakian borders due to drivers’ strike on the border I decided to get there by air this time. Ukraine was the last of our 5 neighbor countries which I have not visited yet. New route from Bratislava to Kyiv by Wizzair with flight only for 30 € per person was a bargain and no brainer. There is no visa requirements and flight takes only 1 hour and 20 minutes. Our weekend trip to Kyiv, the capital of Ukraine was just about to begin.

The best way how to get from Zhuliany airport to the city center was Uber. Airport had a free Wi-Fi and it didn’t take long to find a guy called Mohamed (obviously not local) to pick us up. Journey took us about 20 minutes and for that we paid via Uber app just 3 €. This was probably the cheapest taxi ride from the airport ever.

We only had 2 nights and basically one and a half day to tour the city of Kyiv so we tried our best to see as much as possible. Once we got to the Independence Square we started to see some weird stuff. Suddenly everyone was dressed as a panda or some other animal. Soon enough I realized that those guys were students trying to get some money of tourists by taking pictures of them or with them. I saw some people even putting their smelly head masks on their own heads which I found very disgusting.

I realized even before coming to Kyiv that there are so many sights to see that it is not going to be possible during our short weekend visit. The amount of churches, cathedrals, museums etc. was just stunning. Among all of those above my favorite was probably The Great Patriotic War Museum. It is located under the Motherland monument which is huge, 62m tall statue of a woman symbolizing Soviet Union’s victory over the Nazi’s Germany.

Although getting there basically with no daily light left and very foggy weather, at least we were able to see some of the outline of Motherland monument and few of many post war tanks, helicopters and planes. Not being able to fully enjoy the outside part of the museum we headed inside. I am not a big fan of museums but here I have to admit that after seeing this museum it will really touch you. Different wars being displayed by real vehicles, uniforms, guns, photos and many, many more memorabilia.  Some of those war enthusiast could spend there a whole day and all just for an entrance fee of 70 cents.

This was probably our first trip in foreign country where we didn’t use any public transport not even once during our short stay. First of all if you live in the city center you can pretty much walk everywhere within 30 to 45 minutes. Once you need to get somewhere further like Motherland Monument I definitely recommend using Uber. We used Uber 5 times all together approx. 1 hour of driving and end up paying ridiculous 9 €. If you don’t have Wi-Fi signal just go to the nearest restaurant and ask. They usually have Wi-Fi with no password. We would just go for a beer to rest a bit and while paying we got an Uber to pick us up.

I have visited 22 capital cities of European countries but I have to say that Kyiv would be if not TOP 5 then definitely TOP 10 of them. The ratio between price and quality regarding food, accommodation, drinks, and services is probably one of the best at all. Although being less visited than London, Paris or Budapest I would definitely recommend Kyiv as a great, modern and vibrant city to visit. There are as many monuments as in any other major city in Europe and there is nothing to be afraid of. I am 100% sure we will go back because we still haven’t seen all there is to see and to enjoy once again the gastronomy which this city offers.